A Note about the Reading LIsts

Lists of books relating to race, racism and antiracism are popping up everywhere.  The quantity of available materials is enormous and the content of these lists may overlap.  Here, we've included a sampling of lists by a variety of authors and organizations. While we trust these sources, we can't vet every title.

Question: Where can I find these books?

To locate copies of books to borrow,  please use the boxes below to access library catalogs: OneSearch (Skyline College Library) and Access to Books & More from PLS (Peninsula Library System).

Don't forget to Ask a Librarian if you need a hand.

Lists for the Study of Black History

Lists from Around the Country

In tribute to the memory of George Floyd, who died at the hands of the Minneapolis police, and in support of the worldwide outcry over his death, PW’s comics editors have compiled a list of graphic titles about African American life and history. The titles listed here are primarily nonfiction graphic works that address topics including the Civil Rights Movement, hip-hop, gentrification, white supremacy, the criminal justice system, police brutality, and the lives of black women. In addition the list also offers several works of fiction that offer insights into similar topics via their settings and skillful characterizations. We welcome suggestions for other titles to add to our list.

A Black Woman Did That by Malaika Adero and Chanté Timothy (Downtown Bookworks)
A lively compilation of illustrated biographical profiles of 42 dynamic black women whose accomplishments have transformed the world, including such figures as Michelle Obama, Ida B. Wells, Serena Williams, Ava DuVernay, and Stacey Adams. For young readers.

Bingo Love by Tee Franklin and Jenn St-Onge (Image).
Hazel and Mari, two black teen girls, meet at a bingo hall in 1963 and fall in love but must hide their feelings and go separate ways, only to accidentally reunite decades later—after marriage and raising children—in a lovingly rendered fictional tale about second chance queer love.

Black History in Its Own Words by Ronald Wimberly (Image)

A collection of inspirational quotations from black leaders and artists throughout American history accompanied by Wimberly’s evocative drawings.

This vivid graphic adaptation of Canada’s acclaimed memoir marks his emotional evolution as he moves through escalating levels of neighborhood violence while growing up poor in the Bronx.

The true story of Bronx legend Benjy Melendez, son of Puerto-Rican immigrants, who founded the notorious Ghetto Brothers gang in the 1960s before establishing peace between the warring gangs in the 1970s in what was a prelude to the Hip-hop era.

This massive 4-volume graphic history of Hip-hop beginning in the 1970s in the Bronx covers four decades of musical, visual, and literary innovation that has transformed music and youth culture around the world.

Flowers offers a series of poignant and insightful graphic stories that explore the lives of black women, the cultural complexities around their hair, and issues of race and class in the U.S. and in Africa.

Recreated graphically, Butler’s acclaimed 1979 novel tells the story of an -African American woman from the 1970s who travels back in time to slavery and meets an unlikely ancestor.

Baker’s powerful graphic work depicts the life and times of the self-educated African American preacher who led a slave revolt in Southampton County, Va., in 1831, believing that God wanted him to free the slaves.

Sentences: The Life of MF Grimm by Percy Carey and art by Ron Wimberly (Vertigo)

The true story of the life of legendary Hip Hop MC Percy “MF Grimm” from his time as child actor on Sesame Street, then as a drug dealer who uses a wheelchair after a murder attempt, and his eventual rise to become an underground rap star.

Showtime at the Apollo: The Epic Tale of Harlem’s Legendary Theater by Ted Fox and James Otis Smith (Abrams ComicArts)

Fox’s history of the famous venue surveys the personalities and social issues that have impacted the theater and the Harlem neighborhood that surrounds it, over the course of 85 years.

Six Days in Cincinnati: A Graphic Account of the Riots That Shook the Nation a Decade Before Black Lives Matter by Dan Mendez Moore (Microcosm)

An account of an uprising that engulfed Cincinnati in 2001 after 19-year-old Timothy Thomas was killed by the police, as told from the viewpoint of a participant in the civil disobedience.

Strange Fruit: Uncelebrated Narratives from Black History by Joel Christian Gill (Fulcrum). The lives of little known figures in black American history such as Box Brown and Bass Reeves are featured in biographical stories that bring them back to life.

Stuck Rubber Baby by Howard Cruse (First Second).
A pioneering queer/civil rights graphic novel based in-part on Cruse’s life, it is the story of a young gay white man growing up in the Jim Crow south and his complex relationships with queer and straight members of the African American community in the early days of the Civil Rights Movement.

Yummy: the last days of a Southside Shorty by G. Neri and Randy Duburke (Lee and Low)
A YA graphic novel based on the life and death of Robert "Yummy" Sandifer, an 11-year-old gang member from Chicago's Southside who was killed by members of his own gang.

The three volumes covering the life of Rep. John Lewis offer a gripping and panoramic narrative of the Civil Rights Movement across the arc of Lewis’ heroic social activism and public service.

The final deluxe hardcover compilation edition of a pioneering and critically acclaimed graphic biography of Martin Luther King Jr. has been praised for its expansive and creative depiction of King’s life.

The landmark 16-page 1957 comic book account of the 1955 Montgomery Bus Boycott led by Rosa Parks details the tenets of the philosophy of nonviolence as well as the tactics used to battle Jim Crow segregation on city buses.

A graphic memoir by the late Frank “Big Black” Smith, a former Attica prison inmate later turned prisoner-rights advocate, who was an inmate leader during the four-day 1971 Attica prison uprising, a landmark event in the history of mass incarceration.

Maurer and Jones adapt Maurer’s landmark examination of four decades of the explosive and socially corrosive expansion of the American prison population into a graphic work.

This anthology of comics looks at the economics, racial disparity, and racist social impact around financing and building prisons.

Black Panther: A Nation Under Our Feet by Ta-Nehesi Coates and Brian Stelfreeze (Marvel) (log in as you would to Canvas).

The classic Marvel black superhero, the Black Panther T’Challa, King of the Afrofuturist African domain of Wakanda, has been reimagined for a new generation by National Book Award –winner Coates.

An irresistible combination of satire and horror in a quirky graphic exploration of urban gentrification, racial tropes, and class among the young and insufferably hip in a former working class Chicago neighborhood.

This complex and inspirational graphic novel is aimed at young adults and memorializes a number of victims of police violence (among them Eleanor Bumpurs, Amadou Diallo, and writer Henry Dumas), while also probing the issues surrounding police brutality and Black Lives Matter.

Your Black Friend and Other Strangers by Ben Passmore (Silver Sprocket). 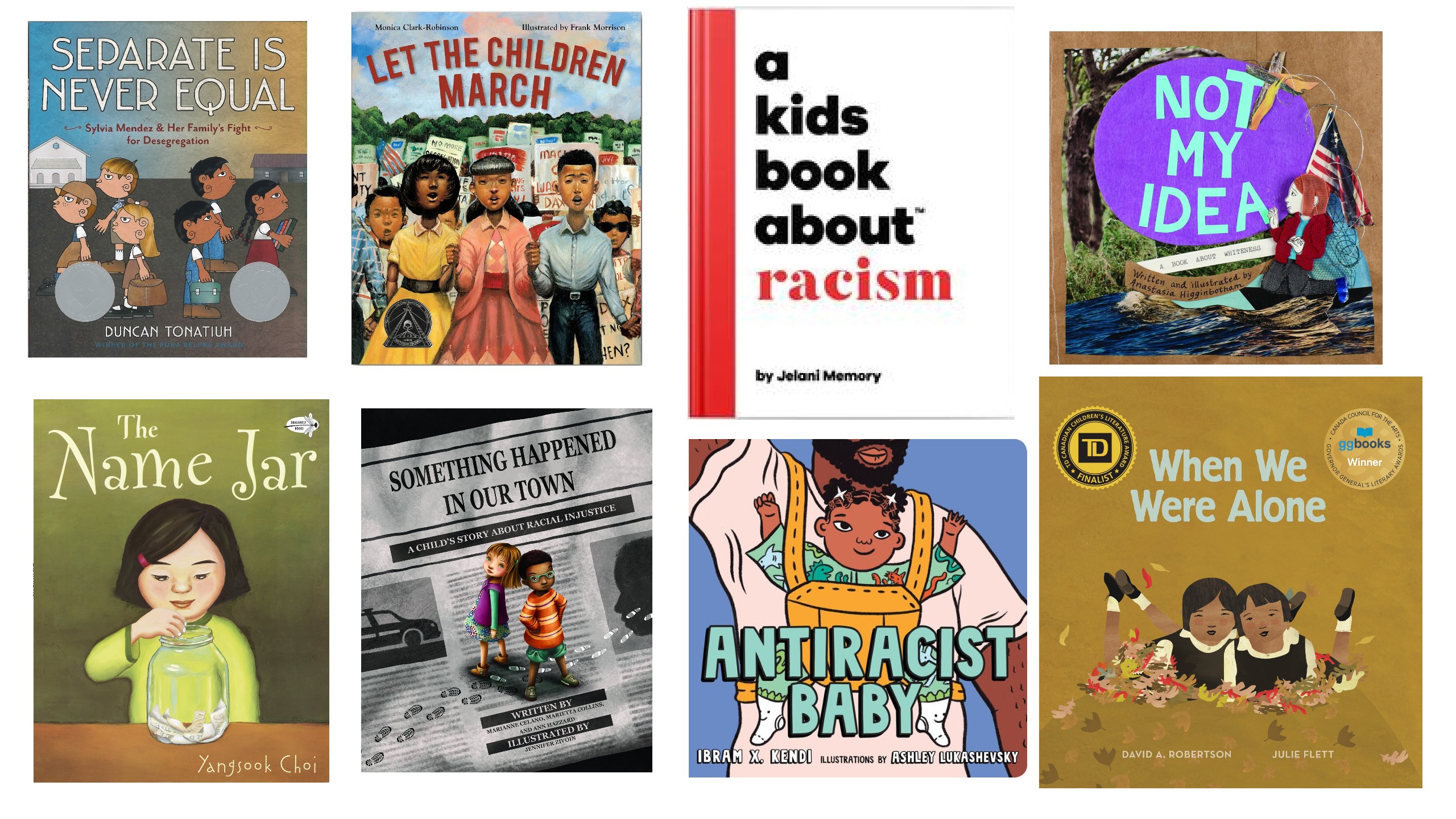 Antiracist Pedagogy Reading List, compiled by Andrea Aebersold, director of faculty instructional development in the Division of Teaching Excellence and Innovation at the University of California at Irvine.

*This is a working document with the goal of better understanding antiracist pedagogy in higher education. Sources will continue to be added. Email andrea.aebersold@uci.edu with additional sources. Please feel free to share this document.

hooks, b. (1994) Teaching to Transgress: Education as the Practice of Freedom. New York: Routledge

Inoue, A. B. (2019) CCCC Chair’s Address: How do We Language So People Stop Killing Each Other, Or What Do We Do About White Language Supremacy.” CCC 71.2

The Danger of a Single Story

A Guide to Coded Language in Education

Is Your University Racist?

Tatum, B.D. (2017). Why Are All the Black Kids Sitting Together in the Cafeteria?: And Other Conversations About Race. New York: Basic Books.