Hilary Cruz Mejia, a 19-year old Latinx immigrant from Puerto de Iztapa, Guatemala, a first-generation college student, and a queer poet, who sometimes is unable to find meaning in logical language, though poetry with its rhythms and alliterations has been a healing process through her transition in the U.S. While she graduated from Skyline College in 2020 she has continued as president of the student Poetry Club. 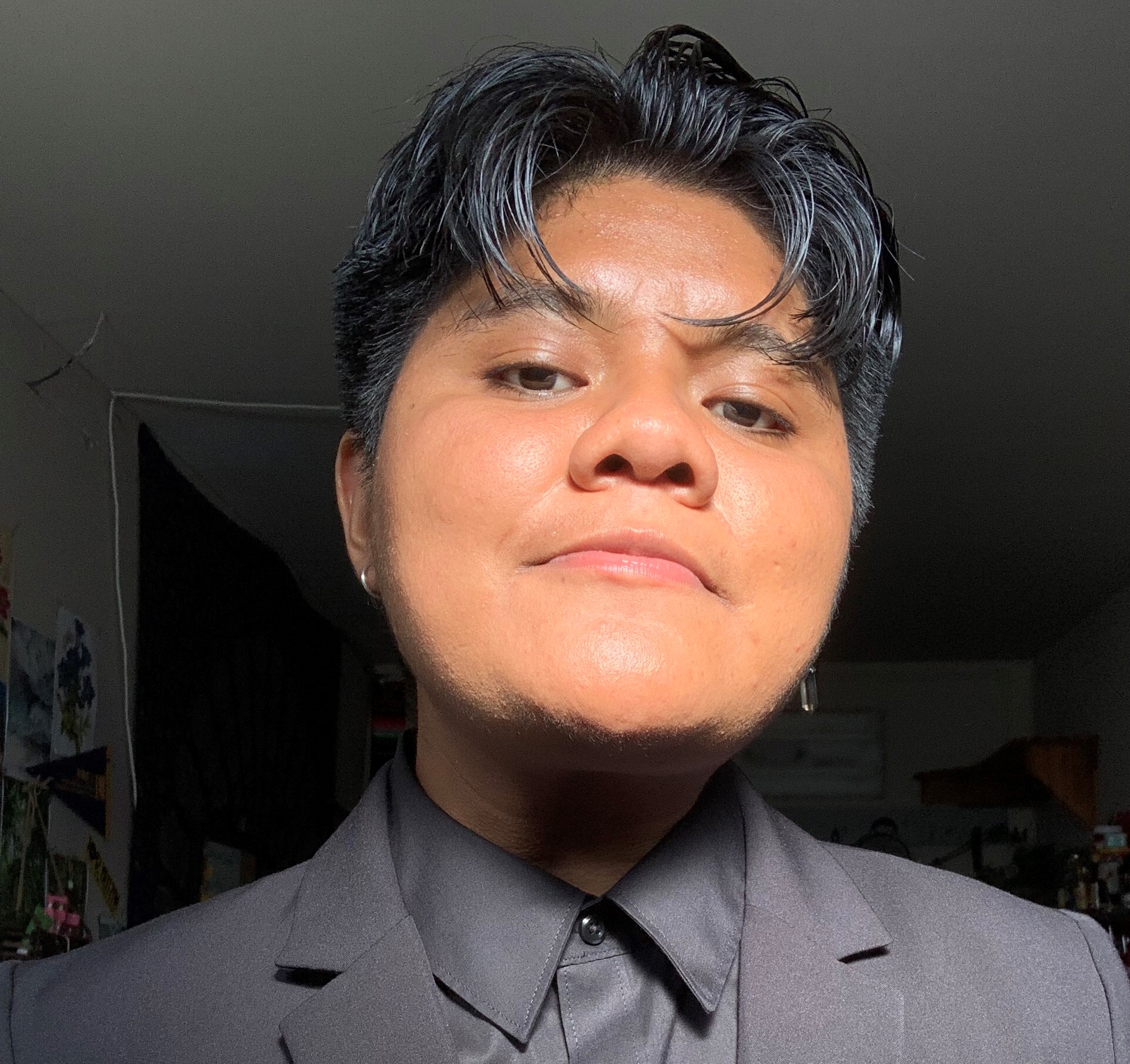 On Thursday, March 18 at 4pm Skyline College Library invites you to a virtual Poetry Corner reading and discussion on the theme of ecofeminism. Register here today! tinyurl.com/PoetryCornerEWEE 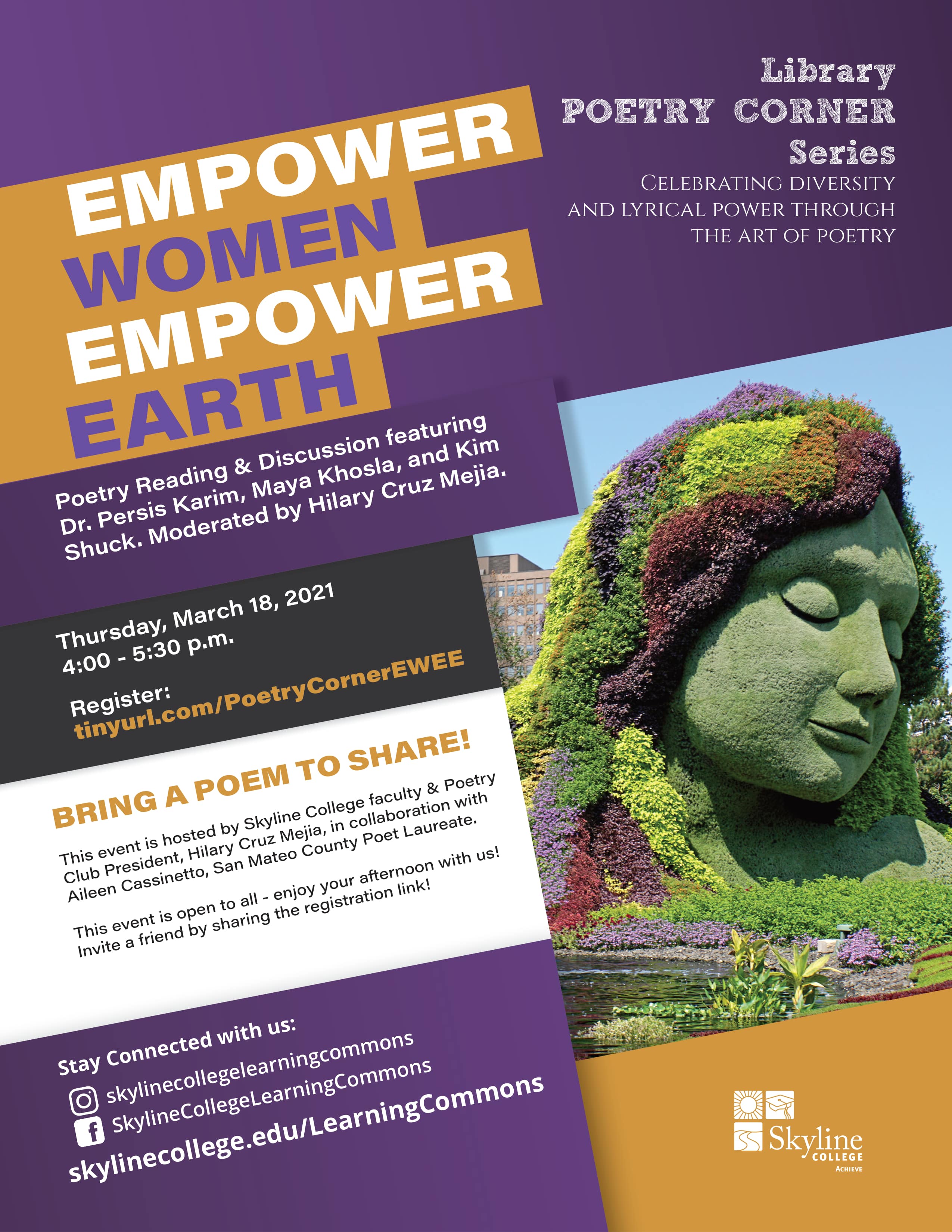 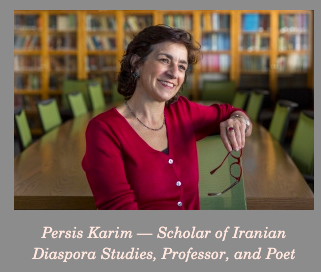 Dr. Persis Karim holds the Neda Nobari Endowed Chair and is the director of the newly-established Center for Iranian Diaspora Studies at San Francisco State University. She is also a professor in the Department of Comparative Literature. Her groundbreaking and critical work on literature and culture of the Iranian diaspora, as   well as her role in collecting and editing three anthologies of Iranian diaspora literature, have earned her recognition and respect in several fields including literary, diaspora and Iranian studies. http://persiskarim.com/dev/ 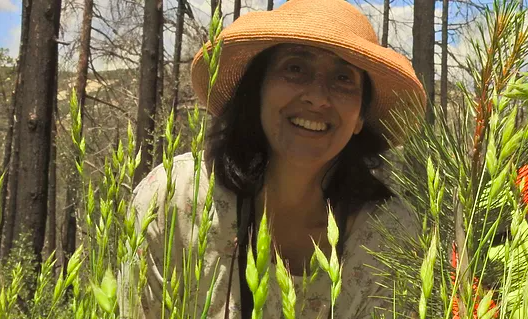 Maya Khosla is a wildlife biologist, filmmaker and writer. The former Poet Laureate of Sonoma County (2018 – 2020), her collection of poems, All the Fires of Wind and Light, was published in 2019. Her work takes her to wilderness areas, to the page and to the  screen. She has documented forests, fire scientists  and firefighters talking about ways to be wise about wildfire. Maya’s work has taken her across coastal India, Kenya, and the United States. https://creekshade.wixsite.com/mayakhosla 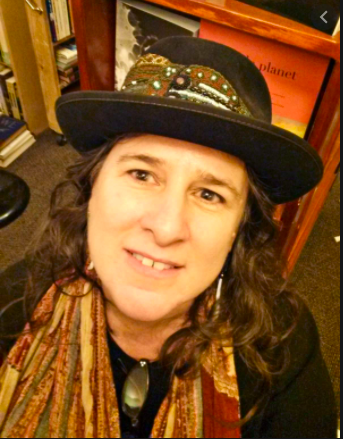 Kim Shuck is a Tsalagi (Cherokee)/Euro-American poet, author, weaver, and beadwork artist born in San Francisco, California. She belongs to the Northern California Cherokee diaspora and is a member of the Cherokee Nation of Oklahoma. In 2017, Mayor Ed Lee named Shuck as the 7th Poet Laureate of San Francisco. Other awards include a PEN Oakland Censorship Award, National Laureate Fellowship from the Academy of American Poets, KQED Local Hero Award, American Indian Heritage Month, Mentor of the Year Award from Wordcraft Circle of Native Writers and Storytellers, Native Writers of the Americas First Book, Diane Decorah Award, and a Mary Tallmountain Award. Her most recent work is Whose Water: Poems, released by Mammoth Publications in 2020. https://kimshuck.com/

How do we define "ecofeminism?"
"Ecofeminism, also called ecological feminism, branch of feminism that examines the connections between women and nature. Its name was coined by French feminist Françoise d’Eaubonne in 1974. Ecofeminism uses the basic feminist tenets of equality between genders, a revaluing of non-patriarchal or nonlinear structures, and a view of the world that respects organic processes, holistic connections, and the merits of intuition and collaboration. To these notions ecofeminism adds both a commitment to the environment and an awareness of the associations made between women and nature. Specifically, this philosophy emphasizes the ways both nature and women are treated by patriarchal (or male-centred) society. Ecofeminists examine the effect of gender categories in order to demonstrate the ways in which social norms exert unjust dominance over women and nature. The philosophy also contends that those norms lead to an incomplete view of the world, and its practitioners advocate an alternative worldview that values the earth as sacred, recognizes humanity’s dependency on the natural world, and embraces all life as valuable."